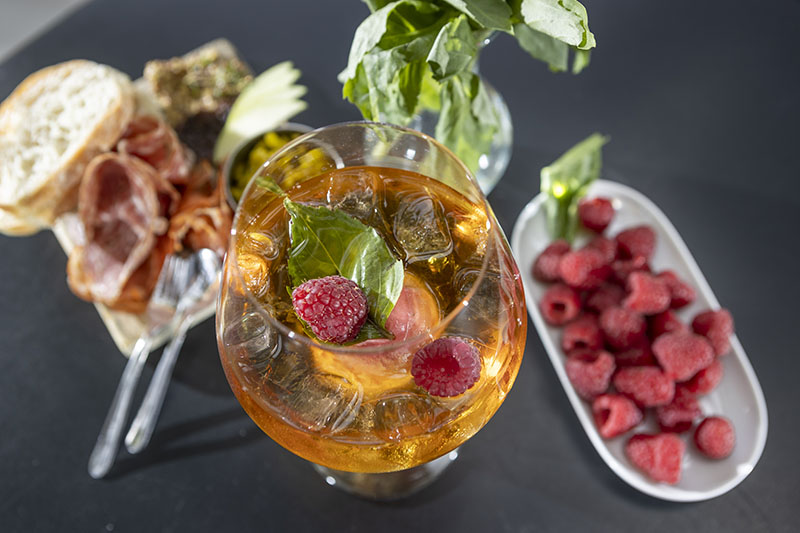 We have all become home bar “experts” over the past year, but most of us haven’t gone beyond the basics. So, raise a super-fancy, drink-appropriate glass to the prospect of delicious craft cocktails once more! Created by expert Whistler bartenders with house-made syrups and tinctures, using the magic of advanced mixology knowledge, from sub-zero martinis to milk-washed rum concoctions, we can’t wait to enjoy these delights in the sunshine!


“We’re in this for the rush,” confides Luc Trottier, the Bearfoot Bistro’s beverage manager. “In hospitality, we love the energy, adrenaline, and excitement you have with a room of guests; it’s going to be so good to have that again.” Looking forward to a busy summer with guests enjoying dining out again, the Bearfoot’s bar team has been getting creative, looking for innovative ways to bring excitement and passion back to drinking and dining. “We’re known for one-of-a-kind experiences; that’s what sets us apart,” says Trottier. “We offer so many unique things from champagne sabering to the Ketel One Ice Room’s sub-zero vodka tasting, so when we got together to try and come up with the best possible martini, we knew it had to be something incredible.”

Of course, you can’t think about martinis without also thinking about James Bond. In Casino Royale, Bond created the “Vesper,” named for his one true love, double agent Vesper Lynd. A potent mix of gin, vodka, and Lillet, the only question is: shaken or stirred? “We draw the line at that!” Trottier says with a laugh. “We didn’t want to do either; if you add ice, it dilutes the drink — so how can it be the best? We wanted our martini to be as cold as possible, so we use liquid nitrogen to chill it; people always think you can’t freeze alcohol, but you can. We aimed to create the perfect martini that’s just between a liquid and a solid, just at the point before it freezes.” It creates quite an extraordinary experience — liquid in an almost syrup form, so cold that it numbs any alcohol burn, allowing your palate to really taste the aromatics and enjoy the experience.

Trottier explains, “The beauty of our Vesper Nitro-Martini is the mix between the gin and vodka. We use Lillet, a floral French vermouth, then our signature Ketel One vodka, and Bombay Sapphire gin for maximum aromatics.” Then, in true Bearfoot fashion, the drink is made table-side with billowing clouds of liquid nitrogen, and a great story! “We talk about how we created this, and the reaction is always mind-blowing! As soon as one table orders it, everyone wants one! Immediately it’s become our best-selling cocktail.”

Jason Redmond’s words convey genuine excitement as the Raven Room’s co-owner tells me about the establishment’s recent re-opening day. There were lineups to come into his bar, tucked away in the Pan Pacific Whistler Village Centre. “The level of stoke was high!” he exclaims. “The locals are back; we missed those faces so much! Just that vibe of a full room, the banter, all the things we love; there’s nothing like that palpable energy.”

Patio season is off to a great start at the Raven Room; new additions to its outdoor space include decking, a fire pit, and a cozy sectional — all the better for watching that late afternoon sun fade into a gorgeous alpenglow over the mountains in the evening. And it’s that warm golden glow that has inspired this new cocktail, The Golden Hour. “We’ve had time to do some research and development, and we thought that people would be thirsting for cocktails which they weren’t doing at home,” Redmond says. “So, we went heavy on technique to create something colourful and crushable!”

The Golden Hour is a twist on the Kingston Negroni, a drink that switches up the classic Negroni recipe with gin for Jamaican rum. In this version, Redmond uses J. Wray white rum, Aperol, and Cinzano sweet vermouth. He then makes a little cocktail magic happen by acidifying pineapple juice to the equivalent of lime with citric and malic acid, adding this to the mix. Then, Redmond adds whole milk and waits for 24 hours. “This clarifies and milk-washes the drink, the acidified juice curdles the milk, and the proteins bind and remove the colour but add in a creamy mouthfeel. It clarifies the drink to a golden hue.” A top seller in the bar already, the Golden Hour is garnished with a dehydrated pineapple to look like a setting sun. “It’s such a great drink,” says Redmond. “So delicious! The combination of that mouthfeel with the high acidity is just so good.”

“We’re kind of a hidden gem, although we’ve been here in the Pinnacle Hotel Whistler for almost 25 years,” Mike Sedlacek, Quattro manager and bartender, says with a laugh. “But as we say, once you discover us, you’ll never leave!” A Whistler locals’ secret, Quattro’s patio overlooks Northlands Blvd. “I think it’s gonna be crazy this summer,” confides Sedlacek. “Everyone’s getting their second shot, so we’re ready for a great time again; I’ve missed faces and smiles so much.” In his seventh year at the restaurant, it’s the atmosphere at Quattro that keeps him going. “It’s just a big family here,” he says. “We laugh together, fight together, but always stand together. From the dishwashers to the owners, we’re all really good friends.”

While Quattro focuses on traditional Italian food — with a cocktail menu to match (think negronis and refreshing spritzes) — Sedlacek is looking to Italy’s neighbour, Spain, and its national summertime drink for inspiration for this stunning Italy-meets-Spain Limoncello White Sangria. “I make the limoncello from scratch,” he says. “It takes almost three months to make, and it’s the best in town; it brings a fruity lemon flavour. To that, I add some crisp Italian Pinot Grigio, a little saffron tea for that intense colour and unique flavour, and it’s topped with ice and soda water. To garnish, I add local berries and fruit, which will change throughout the season, from strawberries and raspberries to blueberries, plus blood orange and regular oranges.” Citrus-forward with a bit of kick from the wine, this is a summer sipper for the ages.

“I really like fresh flavours, something a little fizzy, a little sweet, and I always like snacking on the fruit too,” says Sedlacek. “People seem to really love it — my friends were saying, ‘Why didn’t you make this before! Are you serious?’ It really brings that wow factor!


Rob Kharazmi, Braidwood Tavern’s lead bartender, is recounting the past few months' rollercoaster ride. “We were snowboarding up the mountain when we found out Whistler was closing. It felt like a black cloud over everyone, but now we’re re-opening, and I can’t wait to have those interactions with guests again — just the simple things! Being around other people, I’m so excited to see everyone, it’s been a long time cooped up.”

The Braidwood Tavern relaunched last December as a stand-alone bar space, separate from the Sidecut Steakhouse restaurant at the Four Seasons. The tavern has quickly become a hot spot with Whistler locals, thanks to its daily happy hour, and plenty of locally sourced food and drink on the menu. “I knew it was a hit when I heard people talking about it in the grocery store lineup!” Kharazmi says with a laugh. And no wonder: The menu takes in everything from fish and chips to steak-frites to elk salami pizzas to empanadas and local beet salads — indeed, something for everyone.
Preparing to wow guests this summer, please rise for the Braidwood’s International Caesar Flight. “We already had a Japanese-influenced Hattori Hanzo Caesar on the menu, with a vodka-sake infusion, maple soy sauce, cilantro, ginger, wasabi, and Sriracha,“ he explains. “It’s served with peanut-paprika on the rim and garnished with candied salmon, pickled ginger, edamame, seaweed, and lime! So, that was our jumping-off point to create an international flight of Caesars with flavours and garnishes from Mexico, Britain, and [of course] Canada.”

Britain is represented with a rosemary-infused gin with a Sgt. Pepper Black Angus Steak Rub rim in a nod to the Beatles. Mexico will showcase tequila or mezcal with a Tajin rim and a spicy Shishito pepper and grilled shrimp garnish. And Canada will stay classic with a celery and back bacon garnish, pickled asparagus, lemon, and celery salt rim. “It’s gonna be such a hit on social media, and everyone’s talking about it at work. We have so many international employees; everyone’s really excited about the new flight!”

We love it. After all, if we can’t board planes for a while, it seems like a Caesar flight is the best bet!


Any hour is “Spritz o’clock” on the Basalt patio right now with a summer cocktail menu of a half-dozen light, easy-drinking summer sippers inspired by the great Italian Aperitivo hour. “Cocktails are crazy right now,” says Amy Huddle, Basalt’s restaurant manager. “No one wants beer or wine; they’re so excited to try things that they haven’t had at home. And what’s more exciting than a slushy, fun, bubble of a drink that tastes like a summer garden in a glass?”

In the spotlight today is the Giardino (Italian for “garden”) Spritz, with Cinzano Prosecco, Pimm’s, soda water, and a scoop of raspberry-basil gelato from local company Lucia Gelato. “They use super high-quality ingredients, and their products are just so delicious!” Huddle says. Not-too-sweet Italian prosecco blends with tart raspberries and fruity Pimm’s for a refreshing, tall drink with a well-balanced hint of bitterness amongst the sweetness of the fruit. Served on ice in a large wine goblet with the ball of gelato suspended in the bubbles, bobbing with fresh berries in the Pimm’s-blush cocktail, this instantly Instagrammable drink goes down smoothly on Basalt’s bustling patio, situated right on the Village Stroll.

“Our patio’s been just great so far,” Huddle says. “It just sings in the afternoon; the soft light is just so pretty. Who doesn’t want to spend an afternoon just lounging, people-watching with a drink in your hand?” It’s been a joyful time for this restaurant industry veteran to see locals coming back to the restaurant. Still, Huddle can’t wait to welcome those first international guests. “I’ve missed the personal connection of seeing people come back year after year to Whistler, and the excitement of hearing people’s stories from all around the world and why they chose Whistler. It doesn’t matter if it’s their first time or 20th — I love to see them!”