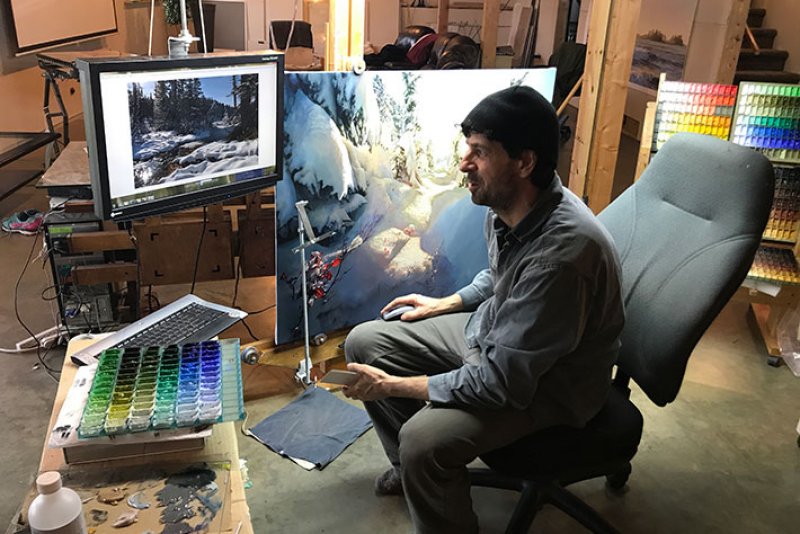 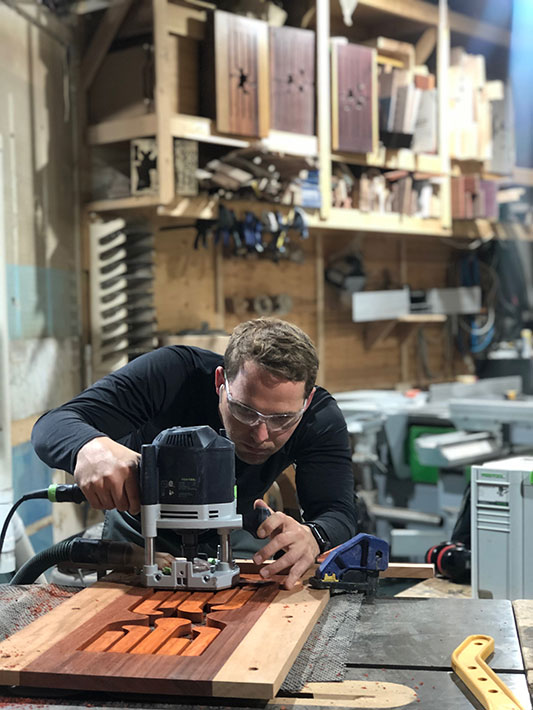 If you truly wish to experience the artwork of the up-and-coming artists, the re-inventors, or the new influencers, step beyond these pages and embark on an adventure of the up-close-and-personal kind through Whistler’s fine art galleries. Here’s why: photos don’t always capture the scale of a painting or artwork, the nuances of infinite colour palettes or weave of woodgrain, the musical notes that resonate, or the way light breathes animation into an artwork in the precise way the artist intended.

Kerry Langlois is a young artist already causing ripples of interest and influence in the gallery scene with her moody, dark images that are balanced by the way she uses light in her paintings. “Gentle Shores,” displayed at the Adele Campbell Gallery, employs a smooth resin coating on top of the painting to create an ethereal glass finish. In her most recent work, Langlois has added sparkle to her paintings. “There are elements of tiny bits of glitter that sparkle like frost or mist in the air, the starlight through the trees,” says Liz Harris, gallery owner and director. “It’s really special, and she’s one of those artists with immense energy and excitement around her.”

For the established artist, being a new influencer can mean reinvention. Artist Laura Harris has been with the gallery for 17 years; however, she has never stopped pushing her limits. In her most recent collection of abstract landscapes, Harris creates a rawness and roughness to the work, through the “drips and gobs and the threads that gather at the edge.” Both highly expressive and emotive, there is an intimacy in Harris’s work that draws the viewer closer to the piece to examine the sensory layers and underlayers. “Harris built up a lot of her more recent paintings with layers of linen and cotton and torn paper and canvas so that it has extensive texture to it, an almost cracking element to it,” says Liz Harris. 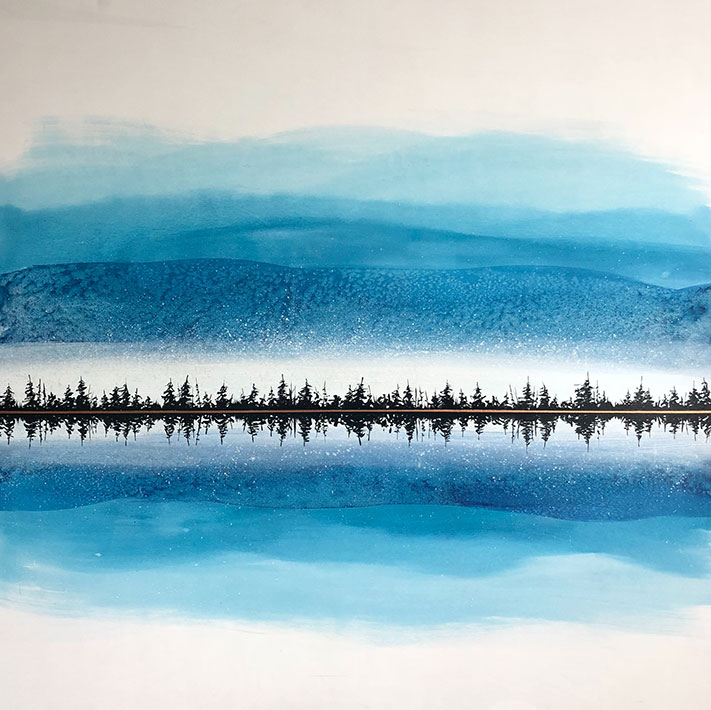 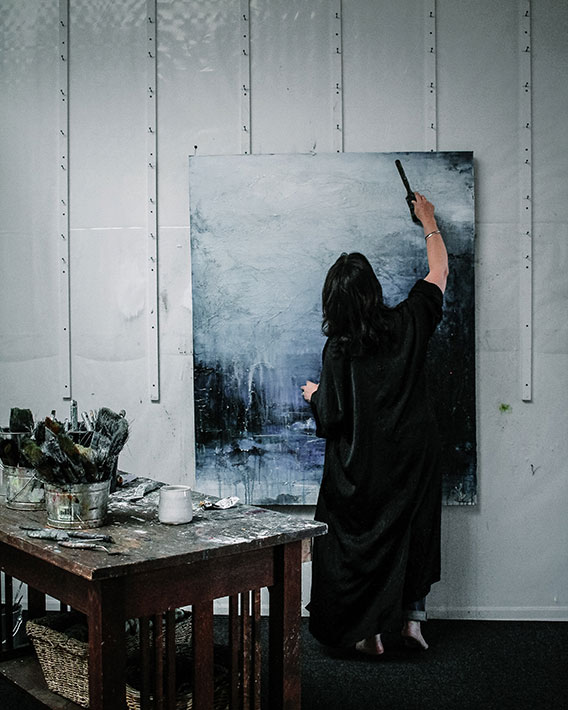 The viewer becomes explorer while admiring Jay Kelly’s mixed-media painting “High Mountain Altitude” at the Whistler Contemporary Gallery. From a distance, its vintage style melds with modern technique to portray a fashionable skier, perhaps gazing longingly up at the snow-covered peaks. Edge closer, and you’ll discover Kelly has embedded whole worlds of meaning throughout the canvas, for the “paint” is, in fact, a collage of printed material. “It’s a photorealistic style that he creates with his collages. Everything is made with small rips of pieces of paper,” says Kyle Nordman, gallery co-owner. Using vintage novels, magazines and art history books, Kelly painstakingly tears the pages with his hands and glues each piece to form shadows and highlights until the collage reveals a nostalgic image, one that hearkens back to the days of classic beauty. 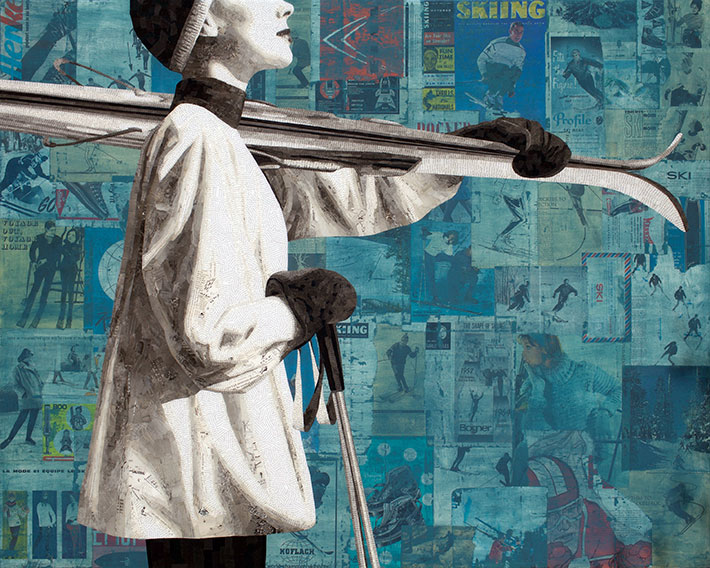 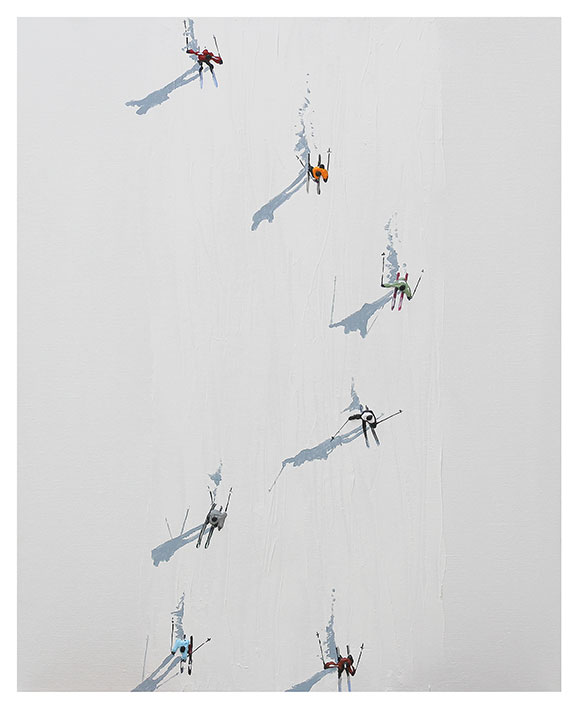 Multidisciplinary artist Gloria Estefanell’s style may be unique to North America; however, her perspective is one that many a passionate skier will recognize, even feel it speaking to the alpine lover’s soul. An elite athlete in the sports of skiing and windsurfing, Estefanell’s “Snow Series” paintings were not inspired by a drone perspective as one might think, but by a lifetime of travelling up mountains by chairlift. “Estefanell says she’s almost obsessed with the aesthetic of landscape and architecture and art, and so she’s always trying to find a way to put those together,” Nordman says. The precise and delicate figures carve the white canvas in a way that harnesses the spirit of gliding on snow, and the perfection of a minimalist approach.

For Mark Richards, owner of the Mark Richards Gallery, the next evolutionary leap in his artistic process is two-fold. Firstly, he’s using a new, superior camera in his photography, which allows more precision and more detail. Secondly, he’s focusing keenly on his subject matter, with a mission to take winter fine art scenes to the next level of such high quality, they’ll transcend the ski market. Capturing the perfect bluebird powder image of a photograph like “Snow Ghosts” is no small feat as it requires treks into the wilderness in the bitter cold. Ironically, clear skies on the coldest days offer the warmest look and the best chance of catching alpenglow.

Back in the studio, Richards works intently with the raw image file. He shapes and transforms the texture, shadows, highlights and colours of the image to ensure the balance of light is correct. In the artwork “Whistler Bluebird,” the peaks appear to glow, yet reveal remarkable detail in the texture of the snowfields, showing the dynamic range of the process. One of the challenges of working with a higher resolution camera is that it affects post-production too. “There are just more steps along the way to make sure the quality and the sharpness of the images are maintained to the very last step,” says Richards. Finally, each work is screened onto a canvas using an emulsion, which reflects a profusion of light, allowing his artwork to glow, even in low-light environments. 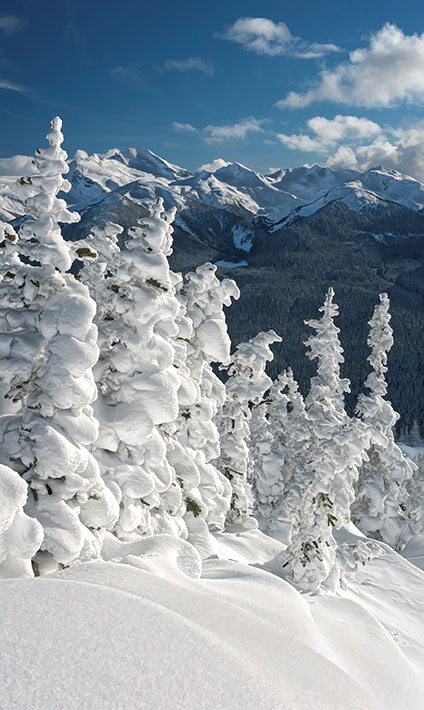 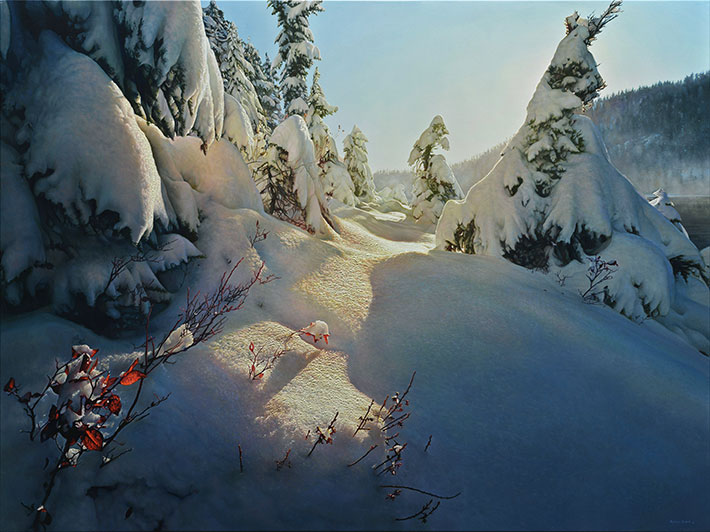 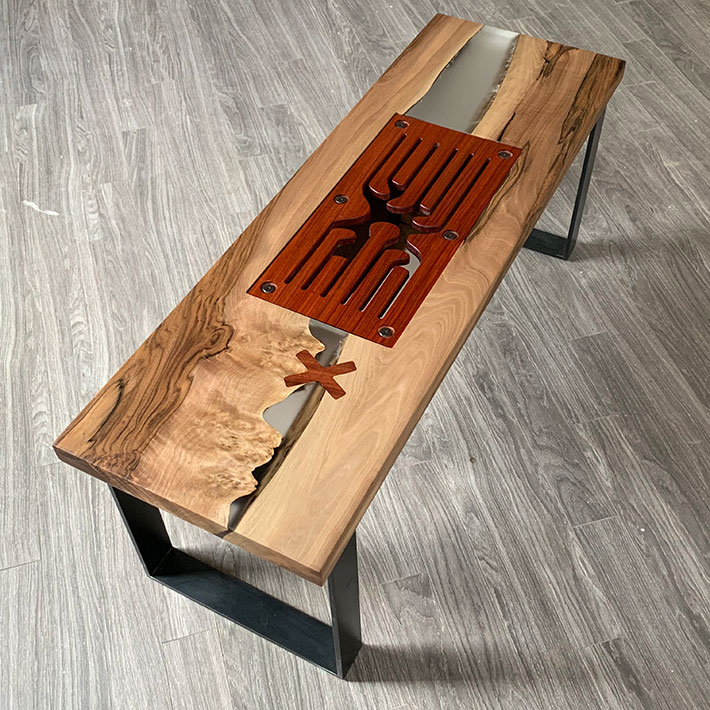 At Mountain Galleries, artist Ben McLaughlin describes his sound resonating furniture as a “modern take on a traditional, ancient African instrument.” He works to combine different species of tonal wood from Canada, Africa, South America and the United States into functional furniture like musical coffee tables, benches and side tables. For example, he might incorporate Vancouver-grown English walnut with a Bubinga X inlay, a Padauk soundboard, and a clear epoxy resin finish in one piece. McLaughlin designs all the drums and the musical furniture pieces, so the soundboards themselves are interchangeable. “Essentially the idea is you could have a whole library of tonal and resonant qualities for one drum or one piece of furniture,” says McLaughlin. “By switching up patterns and different pieces of wood you can have a level of customization to each piece.”

Innovation is embedded so deeply in Richard Mravik’s artistic process that he is currently building a hovercraft to access remote locations to take photographs of his subject matter, on which he then bases his paintings. The hovercraft allows him to travel over river rocks up the Comox River to places even a helicopter has difficulty accessing — if it can reach them at all. Mravik’s oil paintings can be described as hyper-realism or magic realism, because they look like photographs, capturing the perfect light at just the right moment in the day, as shown in “Reminisce of Autumn.” To create his compositions, he takes multiple photographs from various locations and stitches them together. He’ll pull water in the foreground from one photo, trees in the background from another, and set up the photo collage on a high-definition screen next to his canvas. From there, he paints while referencing the screen using the traditional pointillism technique associated with Neo-impressionism, by dabbing tiny drops of paint onto the canvas. His process is unique, drawing on traditional painting styles, modern high-tech, engineering skills, pure invention and artistry.