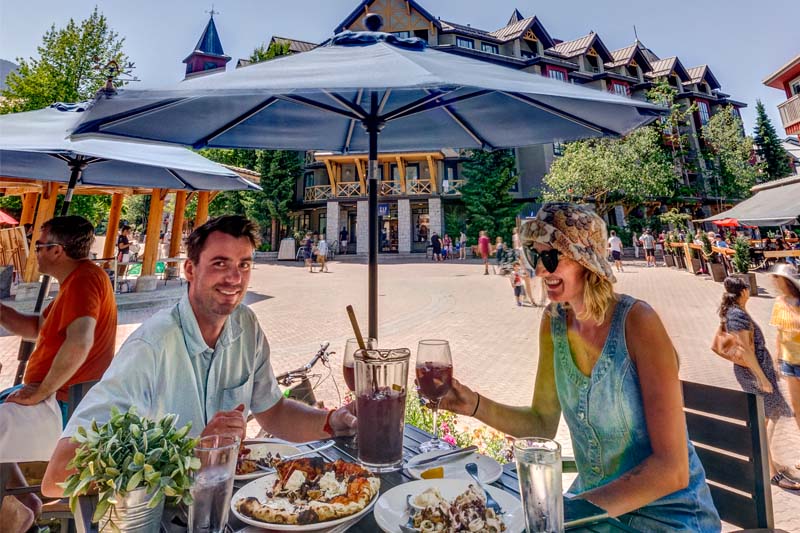 Sunshine, music, good vibes, laughter — and great food and drink! It’s the recipe that we have all been waiting for, and it’s being served right now on patios throughout Whistler. From a global tasting tour including sizzling skewers to a re-imagined elk tartare and everyone’s favourite, a Margherita pizza, Whistler’s restaurants have been looking forward to hosting guests on their busy, buzzing patios again. Below, we feature summer dining favourites and ask some of Whistler’s top chefs what they most look forward to this patio season.

I’m pumped to be back out there!” declares Melissa Craig, Bearfoot Bistro’s executive chef. “I’ve missed people so much; all our friends from around the world, our regulars from Vancouver and Vancouver Island — I can’t wait to see them again.” And where better for a reunion than seated at the bar in the stunning Bearfoot Champagne Lounge or catching the last sun on the patio? Good music, good vibes, and delicious food and drink.

“One of the very few silver linings from the pandemic is that an earlier start to happy hour is now available at the Bearfoot,” explains Craig. Happy hour is a simple affair, featuring different kinds of tempting skewers to mix and match. “We’re playing around with all kinds of stuff,” Craig says. “I went all over the globe, including a Thai-inspired free-range chicken with nam jim, cucumber, toasted cashew, and coconut; a Moroccan lamb kefta with couscous, harissa yogurt, fresh mint, tomato, and chickpea crisp. And my favourite, a braised baby octopus with Ocean Wise prawns, chorizo vinaigrette, black garlic, and grilled ciabatta… we’re off to Spain for that one!”
There is also a sumptuous chili-glazed pork belly complemented by gochujang — a savoury, sweet, and spicy fermented condiment — with fresh jalapeno and the crunch of decadent chicharrones. Don’t eat meat? Vegetarians are also thoughtfully catered to with their roasted vegetable and tangy halloumi option, with baby kale, artichoke, zucchini, peppadew peppers with romesco sauce. 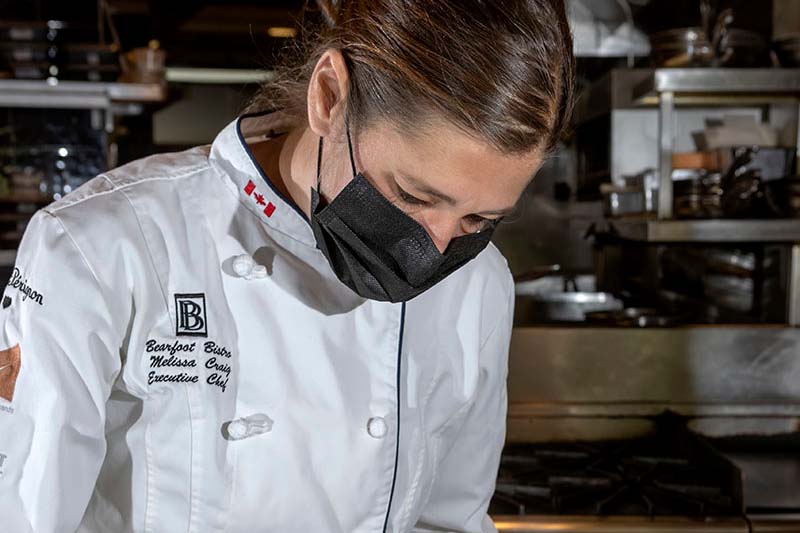 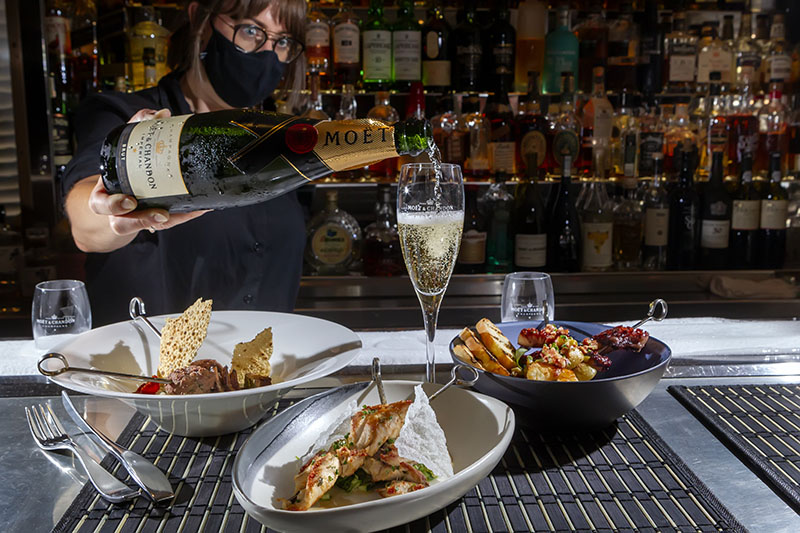 In addition to the skewers, there are happy-hour Sawmill Bay oyster deals, truffle fries, and daily specials such as wagyu sliders and drink specials. And if you crave a sweet treat, the maple pecan churros with smoked bacon caramel sauce and show-stopping nitro ice cream with sundae toppings are sure to be irresistible! “I think it’s interesting to eat small [portions] so that you can have lots of options,” Craig says. “It’s fun and goes with the good vibe. We’re keeping it sustainable, too, with reusable metal skewers.”

So, what’s the perfect pairing for a global skewers taste tour? Just ask the knowledgeable sommelier team at the Bearfoot, and they will recommend a wine — perhaps even one that you have never had the opportunity to try, sourced from near and far — from their extensive wine cellar. 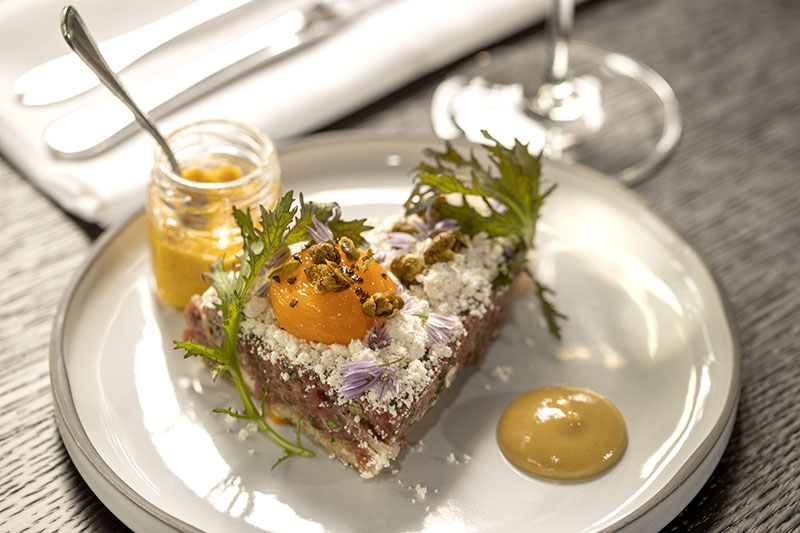 “We had a full dining room the other night, and it was so good to see those faces, to see people come together enjoying good food and drink in a full room again; there’s such happiness. I was so stoked at the end of service — that’s what it’s about.” Nick Cassettari, Alta Bistro’s executive chef, is bubbling over with happiness that the “new normal” is starting to look a lot like the old normal again.

As part of the pandemic changes, Alta now boasts some al fresco on-street dining as well as a pair of patios. One is at the entrance with a custom-made table for larger groups (“the sun hits it just right; it’s like a private dining room!”), and the other has a full view over the dining room, complete with heaters and flower-packed planters. “There’s always a great vibe out on the patio,” Cassettari says. “It’s the first place to fill up. This year, we’re switching it up a bit from just appies and mains, and we now include more shareable items as well. We want to give people the chance to be sociable with their food again!”

Alta Bistro may be shifting its menu, but one staple that won’t change is the tartare. “I can’t take it off the menu,” he says. “People email and ask where it is!” This iteration of the classic bistro dish starts with sourdough focaccia pan-fried with grass-fed butter from Golden Ears Cheesecrafters. Next, the elk steak is a petite tender, an underutilized cut that eats like a tenderloin with real flavour. What happens next is pure Alta Bistro magic: a wild onion vinaigrette with pickled and preserved foraged wild onions from 100 Mile House; a dehydrated “roast beef powder”; a 66.5-degree egg piped on top, plus house-made maple mustard and chive flowers. “It looks like a gangster slice of pizza,” Cassettari says with a laugh. “But it eats so well! It’s the best mouthful: acidic, flavourful, warm, crunchy, hot and cold! So good.” Try it with the on-tap Reichensteiner from Kutatás Wines, a small winery on Salt Spring Island, and soak up that sunshine on the patio.

“We have a beautiful open kitchen at Caramba, and I missed the sound of the customers in the restaurant so much that some days I used to play a YouTube video of ambient restaurant noise while I made food for takeout,” Executive Chef John Shepherd remembers. “I cannot wait to see a full restaurant and a full patio again; I just want to see people enjoying pizza with their friends.” It looks like he will get his wish this summer with all signs pointing to a classic Whistler stunner with gorgeous sunshine and bustling patios.

This summer’s hot patio treat at Caramba is the restaurant’s sourdough pizza. “Sure, pizza’s great any time of the year, but nothing can beat a nice, simple Margherita in the sun,” says Shepherd. “We do lots of other pizzas from wild mushrooms to a superb thin-sliced roasted leg of lamb, but there’s something to be said for simplicity; for me, it comes back down to the base ingredients. That’s the most important thing.” 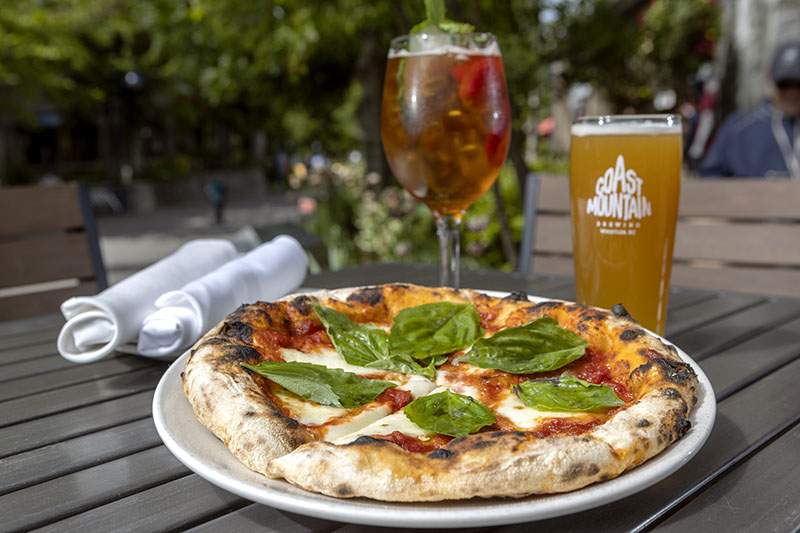 So, back to basics: sourdough — as all you pandemic bakers know — is made by fermenting naturally occurring lactobacilli and yeast; it produces citric acid, which gives sourdough its signature tang. Made from starters fed every day with flour and water, Caramba’s two sourdough starters (which came with their in-house baker) are from a 100-year-old grape leaf from “somewhere in Europe” and, as is the tradition, the starters have names: Tina and Brenda. “When the starters start to bubble and rise, that’s when you make the dough,” Shepherd says. “We use a blend of Tina and Brenda along with untreated Canadian 00 flour.”

This pizza is not quite super-thin Neapolitan-style. Instead, the 70 per cent hydration used in this dough puts Caramba in a category of its own with a crisp bottom, lots of bubbles, and a puff in the crust: essentially a Goldilocks “just right” pizza. “For our Margherita, we use our house-made pizza sauce, flor di latte mozzarella, and some nice extra virgin olive oil. We bake that [in the wood-burning pizza oven] for just four minutes, and then it gets a sprinkle of Maldon salt and fresh basil leaves.”

Elegant. Simple. And crazy delicious. No need for fake restaurant sounds at Caramba now; the Village will be ringing with the sound of happy pizza fans. 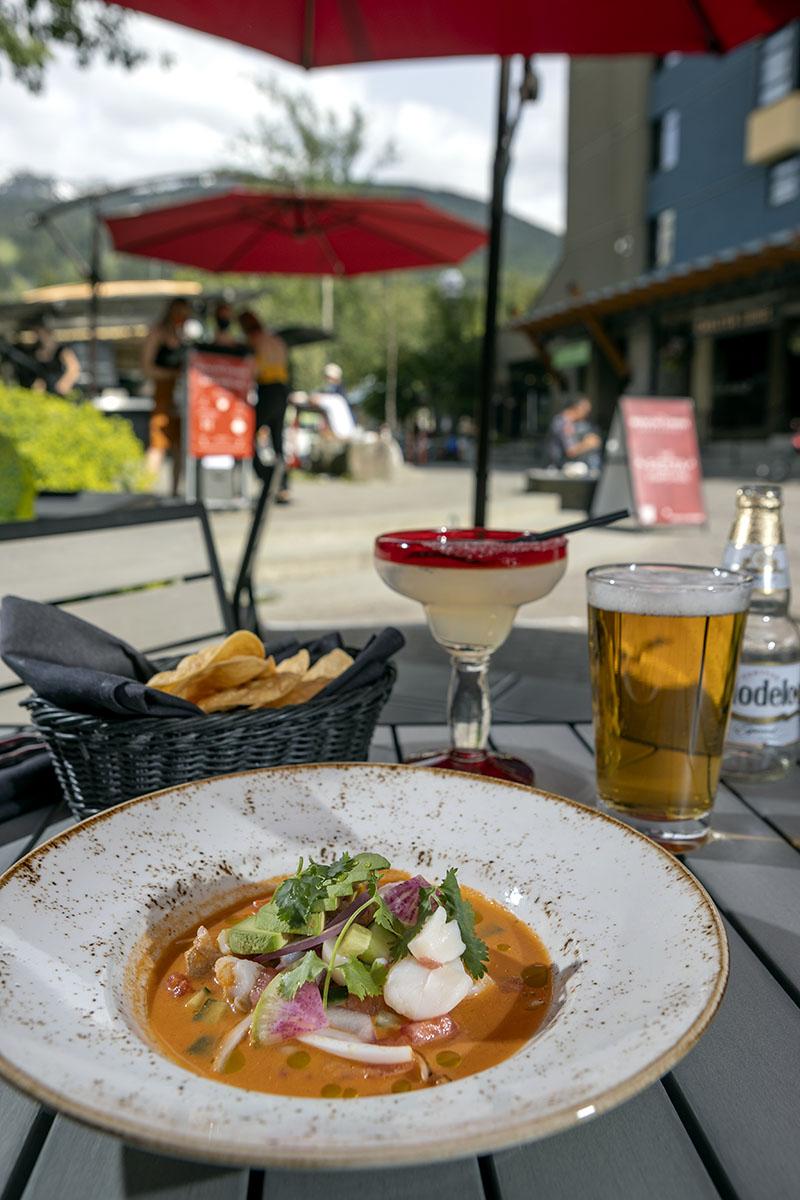 After moving to Whistler in September 2019 from Jalisco, Mexico, Sergio Reyes, Mexican Corner’s kitchen manager, can’t wait for a nice “normal” Whistler summer. “It’s so beautiful here, coming from Mexico, that contrast of the deep, heavy winter to the beautiful summer. It’s amazing.” His fellow countryman, Chef Kevin Orozco from Mexico City, agrees. “The lakes are so beautiful, the trails, the mountains… if you want to be in nature, there’s always something to do, but if you want to party, there’s always a party!”

The two chefs have been working together on new dishes to celebrate the restaurant’s brand-new expanded patio space in a prime position, steps from the Excalibur and Whistler Mountain gondolas. The Watermelon Aguachile created by Reyes is a cousin dish to ceviche; both recipes use raw seafood. Still, unlike ceviche, which “cooks” the seafood with lime juice for 15 to 30 minutes before serving, Aguachile is served fresh, so the seafood is almost sashimi-like. It also comes with a spicy kick! “Aguachile translates to ‘water pepper,’” explains Orozco. “It’s usually made with a blend of fresh and, or, dried peppers blended with lime juice, and it’s served with seafood, garnished with red onions, cucumber, and avocado.”

This Whistler twist dials down the spiciness with refreshing watermelon. “We’ve adapted this to suit our guests, and it’s just so fresh,” Reyes says. “I mix watermelon, habanero peppers, and lime juice, then I add in red onions, cucumber, scallops, and prawns. We serve it with a sliced avocado garnish, fresh cilantro, and cilantro-infused oil to add depth of flavour.

It comes with a side of our house-made, fresh-fried tostada chips.” A favourite for Sunday lunch all along Mexico’s Pacific Coast, the chefs laugh and tell me that it’s known for being a great hangover cure. “You have it super-fresh and spicy with a beer — everything’s good again,” Orozco says, to Reyes’ wholehearted agreement. Despite being a relatively unfamiliar dish, guest reactions have been positive. “Lots of people don’t know Aguachile here,” says Reyes, “much less a watermelon version — I didn’t expect it to be such a hot seller, but it’s been so welcomed.” Orozco agrees. “It’s traditional, but it’s got a bit of Reyes’s style too; we always think about Canada and Whistler when we create new dishes,” he says.

Josh Kelly, Cure Lounge’s executive chef, is stoked for patio season, listing the many benefits of Cure’s large lakefront patio (“the best in Whistler!”). “It’s so lovely to be out there right up against the water. From sunrise at breakfast, we get really nice direct sun all the way through from lunch till sunset.” His prediction for this summer? It’s going to be a busy one down at Creekside, where you’ll find the Cure Lounge inside Nita Lake Lodge. But, cautions Kelly, “Arrive early! It’s prime real estate, and we don’t take reservations.”

One of the season’s smash hits on the popular patio will be Cure’s Seared Haida Gwaii Albacore Tuna. Served rare and crusted with harissa, it comes with avocado, and Crème Fraiche Green Goddess sauce, topped with compressed cucumbers and a house-made preserved lemon vinaigrette. The finishing touch: crunchy, spicy, sweet potato straws. The dish is ideal for sharing, but let’s face it: It’s just so good that you won’t want to. So, you should order a portion each and then share a pitcher of Mojito instead! Also, check out their daily happy hour specials and feature cocktail days like “Marg-Nita Mondays” (all margaritas are $10) and “Thirsty Thursdays,” where you can enjoy any gin and tonic for $10; both are available all day! 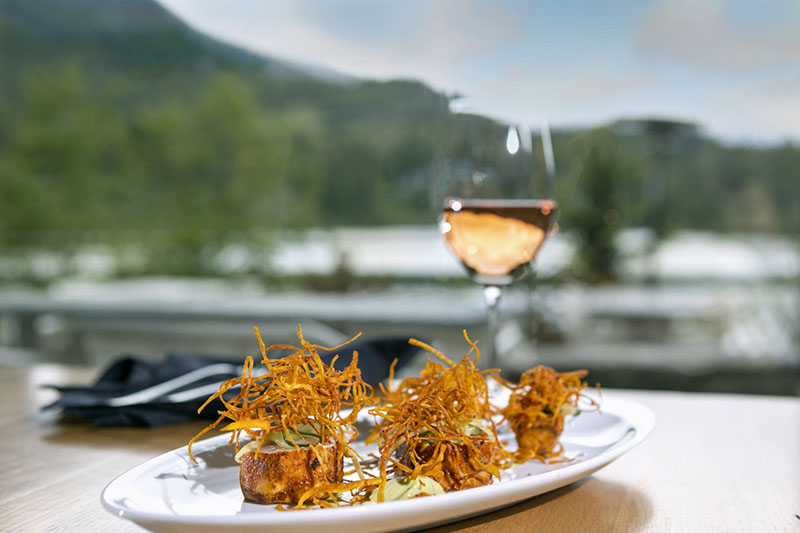 “All the flavours work so well with each other,” Kelly says. “The cleanliness of the cucumber and how it plays with the preserved lemon and harissa, tuna and avocado, are so well balanced together. Just the taste of this is so evocative of great weather and a good atmosphere.”

Excited about the season ahead, Chef Kelly has been craving the beautiful herbs and tomatoes from the lodge’s rooftop garden. “It’s not that I don’t love to braise, slow cook, and ferment,” he explains, “but you do that for six months, and now it’s just so nice to cook fresh again. I love the seasonality of cooking, and I’m so ready for patio season: light, refreshing drinks, fun and shareable food. So good!”