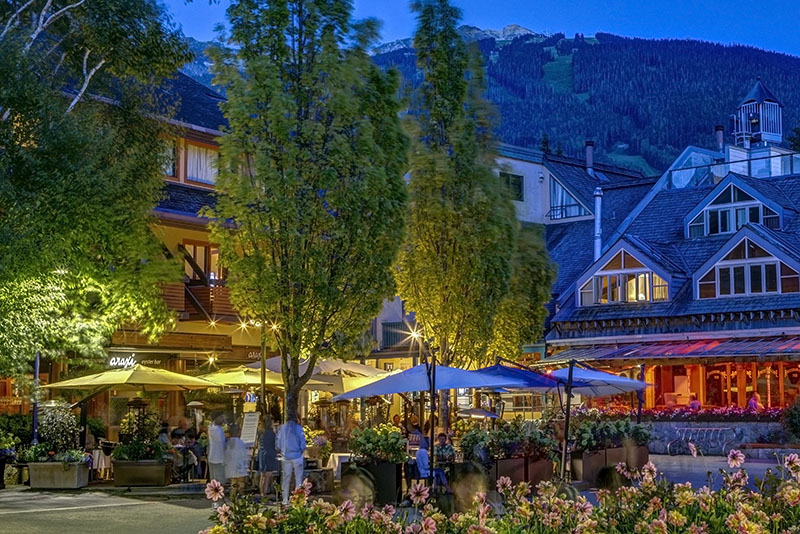 As with most communities, the restart of the economy after the COVID-19 lockdown has brought changes to Whistler, but in response, the resort’s leaders have made getting together easier by allowing some businesses to add outdoor patios, or to expand existing ones.

In June, the Resort Municipality of Whistler (RMOW) announced that it was streamlining the approval process for food and beverage businesses to add or expand outdoor patio spaces, including areas licensed for liquor consumption on both public and private property.

As well, the RMOW increased the number of picnic tables in key areas of Whistler Village to assist businesses that don’t have patio space or the ability to enlarge existing patios. The aim was to improve people’s ability to take in the Village ambiance, enjoying take-out food and beverages while maintaining social distancing.

Tourism Whistler is also offering tips on staying safe while visiting the resort, including bringing a mask for those times when physical distancing can’t be maintained. Wearing face coverings is recommended in the Village. While most businesses are open, a select few are not, and it’s a good idea to make reservations at restaurants, dine at off-peak hours or consider take-out offerings. For more information, including a list of open businesses, check with the Whistler Visitor Centre, visit (whistler.com/covid) or use the Ask Whistler mobile live chat service at whistler.com.

Like their cousins, the otter and the marten, fishers were historically “trapped out” in coastal British Columbia in the 1800s and early 1900s. They weren’t eliminated, but their populations were severely depleted by those who sought to sell their fur for profit. In recent years, all three species have been coming back — fishers are quite widespread across the province, although seldom seen in the Sea to Sky Corridor.
But they are out there, as shown by photos taken by cameras placed in remote locations mostly to track larger animals such as grizzly bears and wolverines. Cliff Nietvelt, wildlife stewardship officer for the B.C. Ministry of Forests, Lands and Natural Resource Operations, said fishers — the males of which can weigh between eight and 13 pounds — are rarely spotted in the Sea to Sky. Recent sightings in the Callaghan Valley, the Upper Squamish Valley and the accidental trapping of one north of Pemberton provide scant evidence to allow scientists to predict fishers’ chances for recovery to historic levels in the region, Nietvelt said.

While fishers are regularly tracked in the Bridge River Valley north of Pemberton, there’s not enough evidence to conclude that that population might be expanding its range into the Sea to Sky area, said Scott Yaeger, Fisher Conservation Program lead for the ministry’s Species at Risk Recovery Branch, adding that more research would be needed. “It can be misleading to draw the conclusion of expansion [based] on a handful of occasional observations,” Yaeger said. 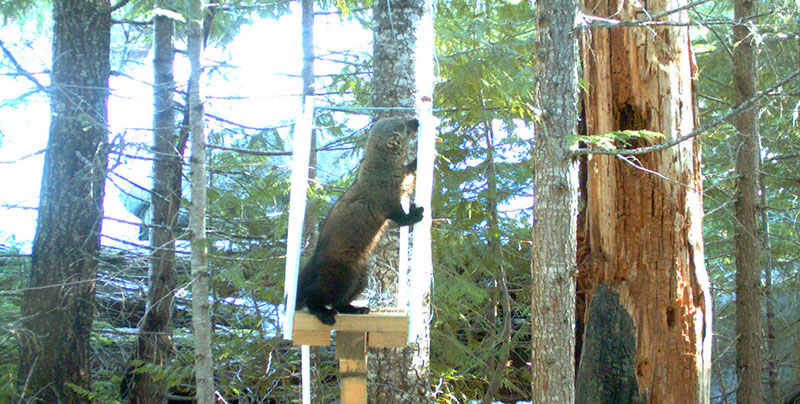 It’s also possible that local sightings of fishers are from a small population that survived the fur trapping days in the Sea to Sky, Nietvelt said.

Identifying a fisher can be tricky to the untrained eye. Their long, slender bodies are similar in shape of the more common marten, though fishers are a fair bit larger — male fishers can be up to one metre long from head to tail, while martens can grow to 65 cm long and weigh between one and four pounds. It’s also possible to confuse fishers and river otters, which are a similar shape to the fisher but larger (up to 1.4 metres long and up to 25 pounds). Fishers mostly live in the forest, and river otters are usually found in or near fresh water — though that, too, isn’t always the case. “They [otters] can travel for quite a distance on land,” Nietvelt said.

Staying Healthy and Safe on the Trails

Any outdoor excursion requires preparation. Whether you’re headed out for a day at the beach, a short hike or a more extended stay in nature, staying safe and healthy takes planning. It’s essential to have the right gear and know how to use it. Do some research on the expected weather, and on the type of surfaces you will encounter. If some of the terrain is rough, do you have hiking boots with ample ankle support and sturdy soles? Do they fit well, and are they broken in?

Hikers should have a backpack containing these suggested items – enough for each member of your party (or have each person carry their own). Do you have a first aid kit in case someone is injured or develops blisters? Does anyone have allergies? If so, bring an antihistamine or an Epipen. Do you have a hat and enough clothing to keep you warm and dry in all the conditions that may arise? Also, bring enough water for all, plus some extra in case you get delayed and lightweight food. A fully equipped backpack should be no more than 25 per cent of a person’s body weight.

If you’re venturing into the backcountry, you should have both a good map AND a GPS, and ensure that your phone or GPS unit has a full charge. A compass is also a useful accessory if you know how to use it. And remember that many backcountry areas often don’t have cell coverage so a physical map could be vital. Keep in mind that a group moves as fast as its least capable member. 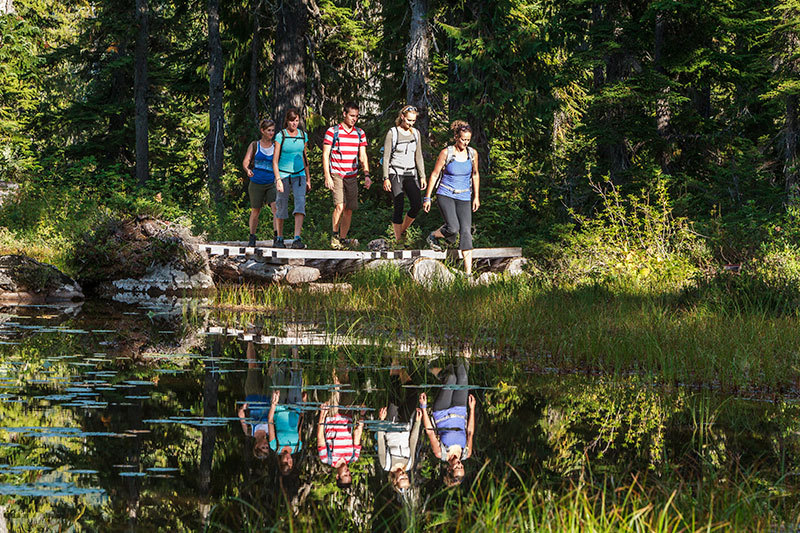 According to the CBC blog “Keeping Canada Safe”
(cbc.ca/keepingcanadasafe), it’s very important to make a plan and share it with someone who’s not going on the outing – including the intended route, and when you expect to return. “Allow more time than you think you’ll need,” states the blog. “For example, (trails.com) offers a method to calculate your time, and suggests you add [an additional] 30 minutes for every 1,000 feet (305 m) of elevation gain.”

Finally, bring those “just in case” items like a headlamp, waterproof matches, and a loud whistle for signalling. Carry a lightweight, reflective emergency blanket and some string or cord, so that you can make an emergency shelter if needed. Bear spray is a good idea, but be sure you know how to use it safely.