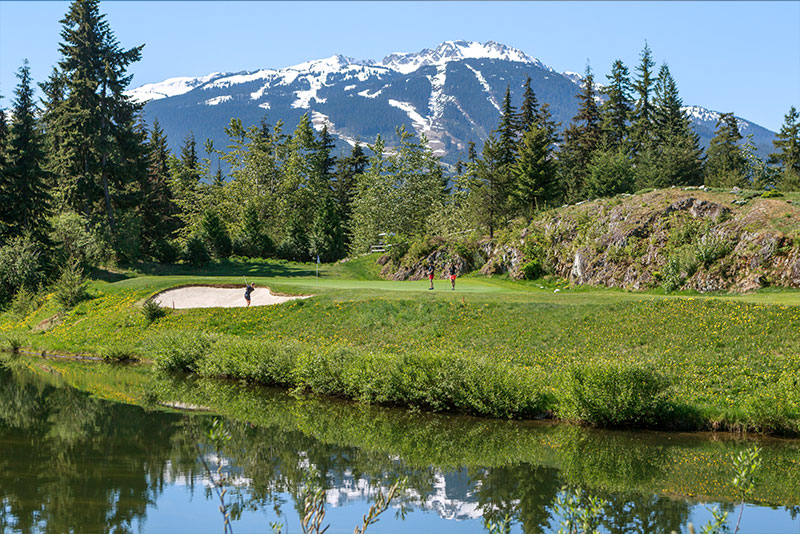 Golf Rules! Bringing FUN Back into the Game

It’s hard to imagine your world-class golfing experience in Whistler getting any more elevated (pun intended). However, the governing bodies of the sport, the Royal and Ancient (R&A) and the United States Golf Association (USGA), have actually teamed up to make that happen.

The rules governing the game of golf were, for too long, far more sophisticated than they needed to be. They were antiquated, complicated and some were just downright silly. The process of revising and modernizing the rules began in 2012 and the new guidelines were introduced on Jan. 1, 2019. It was the first major update of the rules since 1984. So, what did the R&A and the USGA do? They simplified and updated the rules of golf to make them far easier to understand and implement, and as a by-product, have made it possible to improve the pace of play … something we golfers can all applaud!

So what are the major rule changes that will affect the weekend warrior like you and me? Well, I have a handful of the ones that you will most likely encounter during your round. To put them into context, here are some real-world Whistler examples I’ve personally experienced.

The beautiful par-4 fifth hole at Nicklaus North Golf Course demands an accurate tee shot. Water reachable on the left and out-of-bounds markers along the right command your focus to the middle of the fairway. If you happen to spray your drive to the right, however, and out of bounds, the old rule stated that you must re-tee it from where you were originally playing. Under the new rules, you can just drop where you determine the ball went out of bounds and take a two-stroke penalty rather than making the embarrassing trek back to the tee boxes and slowing down the pace for everyone behind you. Check the local course rules with this one, as they may in fact allow you to drop on the edge of the nearest fairway.

Nicklaus North General Manager Jason Lowe adds, “The rules changes are overdue but progressive, and will help break down some macro issues facing the game. At Nicklaus North we also try hard to educate on simple ‘play-ready golf’ elements that can really help save time. 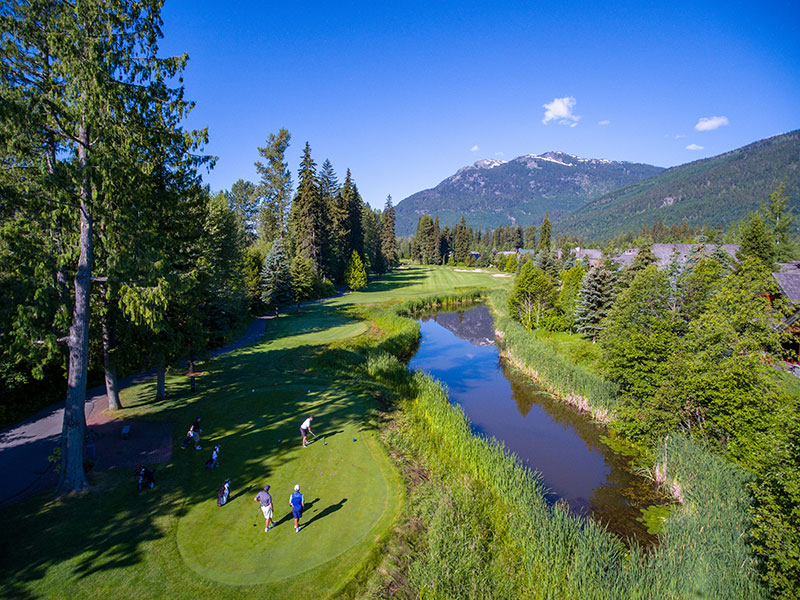 We post signs around the golf course and speak to this on social media platforms, e-newsletters, etc. The out-of-bounds (OB) change in particular is fantastic. I have always thought the only place traditional OB belongs is for the golf professionals on tour, and perhaps some very select, elite local competitive events.”

This is another great update for pace of play. If you are playing at Big Sky Golf Club, and I encourage you to do so, you will no doubt be distracted by the incredible views of Mount Currie that towers above the golf course. That dazzling visual distraction, however, may lead you to hit your shot on one of the holes into the long fescue grass that lines the beautifully manicured fairways and surrounds the perfect greens. The old rules gave a golfer five minutes to look for his or her ball. Five minutes can seem like an eternity if you’re playing well, and in the group behind. It may not seem like much but cutting out two minutes here and there over the course of a day can certainly add up to much better playing times. 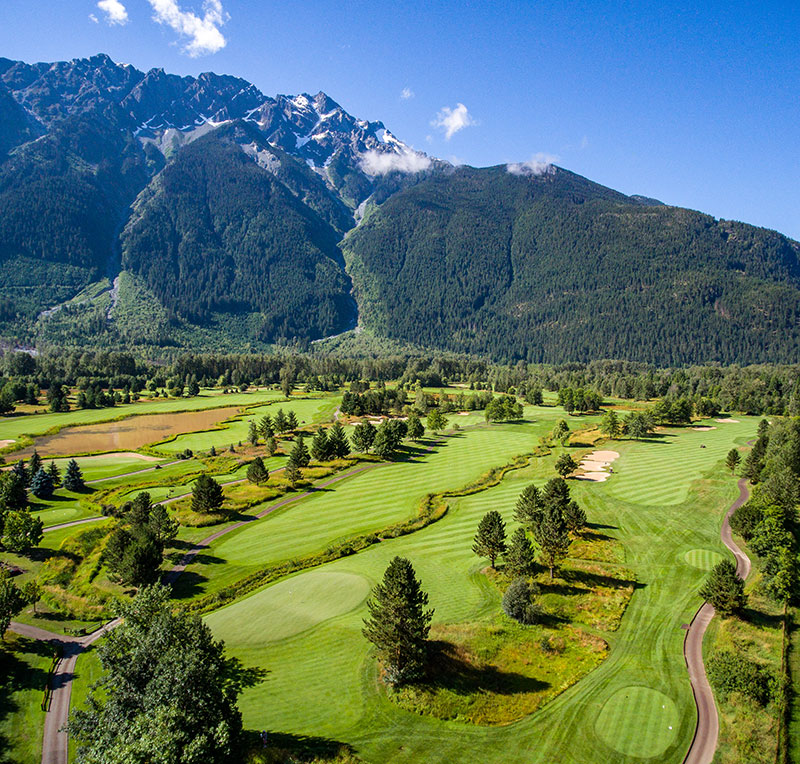 And hey, no one, including Michael McNeil, general manager of Big Sky, likes a five-hour round! “For the game of golf to continue to grow, the rules needed to be adjusted to a degree and slow play is one of golf’s biggest obstacles. I feel that the common theme within all of the new rules changes is that pace of play is at the forefront and the rules are being simplified and a bit more relaxed. Here at Big Sky, we have a local rule to play fescue grass as a lateral hazard, but we encourage golfers to play by whatever rules they see fit. It’s about enjoying the game with the company you keep.”

Dropping the Ball Back into Play:

The Chateau Whistler Golf Club is Whistler’s only true mountain course, with lots of elevation changes and spectacular views of the valley. The short uphill par-4 second hole is a personal favourite that has a creek that protects the front of the green and runs down the left-hand side of the fairway. A pulled or hooked shot will find Fitzsimmons Creek every time! The old rule required the golfer to drop the ball back into place from shoulder height. Here, you ran the risk of the ball bouncing and rolling back into the creek from that height! The new rule commands the golfer to drop the ball from knee height. This helps minimize re-drops but also maintains the integrity of the old rule. Trust me, this one feels weird!

Interestingly, this new rule is currently open to interpretation, according to Padraic O’Rourke, head golf professional at the Chateau. “Our guests can use their imagination when dropping from knee height. With no requirements as to how to stand when dropping, you can kneel or even sit down if you want. What only matters is that you drop from knee height. I am sure we’ll see some very creative drops during the golf season!” 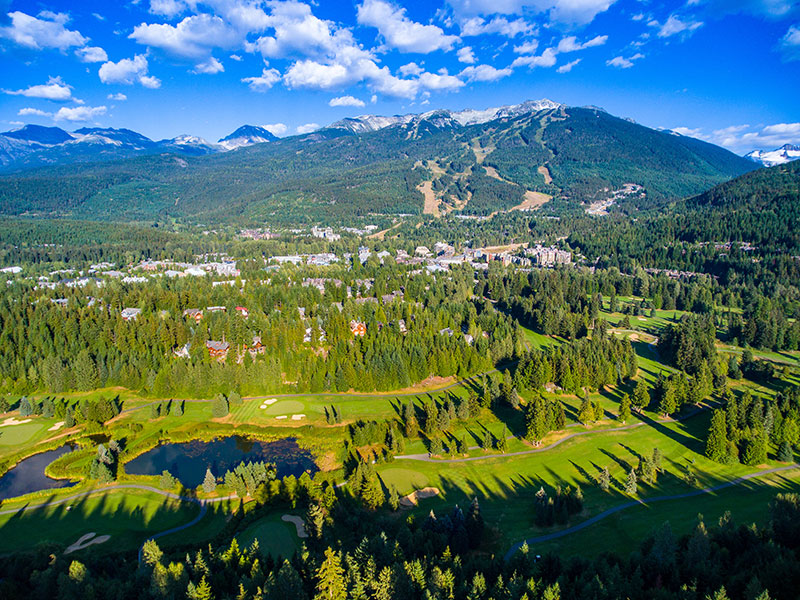 This is easily the most common rule change you will come across during your round. The old rules about getting penalized for hitting the flagstick with your putt and the proper ways to tend it were silly and outdated. The refined and updated rule allows for the golfer to leave the flagstick in while putting, with no penalty.

The Whistler Golf Club has some of the fastest, purest and most undulated greens in the valley and they can be both intimating and exciting to putt on. The fifth hole, their longest par 3, also has one of the largest greens on the course, although you wouldn’t know it standing on the tee decks. Once on the green, if the pin is back-left and your ball has landed front-right, you can be faced with a very long, uphill putt with a fair amount of break. The biggest thing with leaving the pin in unattended is that your playing partners are getting ready for their shots, thus helping again with pace of play. I have found that many players continue to leave it in even for short putts.

Now, let’s be honest: Most of these and the other rules of golf are for tournament play and most of us don’t play in serious tournaments. That said, it is a good idea to know the game’s rules and etiquette and kudos to the governing bodies of golf who are trying to simplify some of those rules and help get more people interested in the game.

We’ll give Alan Kristmanson, director of golf at the Whistler Golf Club, the final word. “At the Whistler Golf Club, we focus on fun. We encourage golfers to enjoy the game how they see fit. If they want to play by traditional rules, have at it, but for those who are high handicappers or just learning, putting the scorecard away and using the occasional “foot wedge” is more than acceptable. Less rules and more fun!”

The Meadows at Pemberton
pembertongolf.com