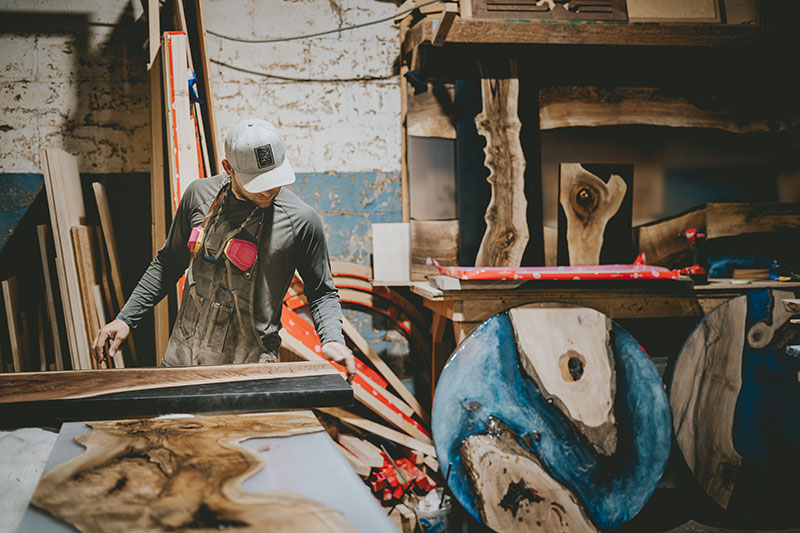 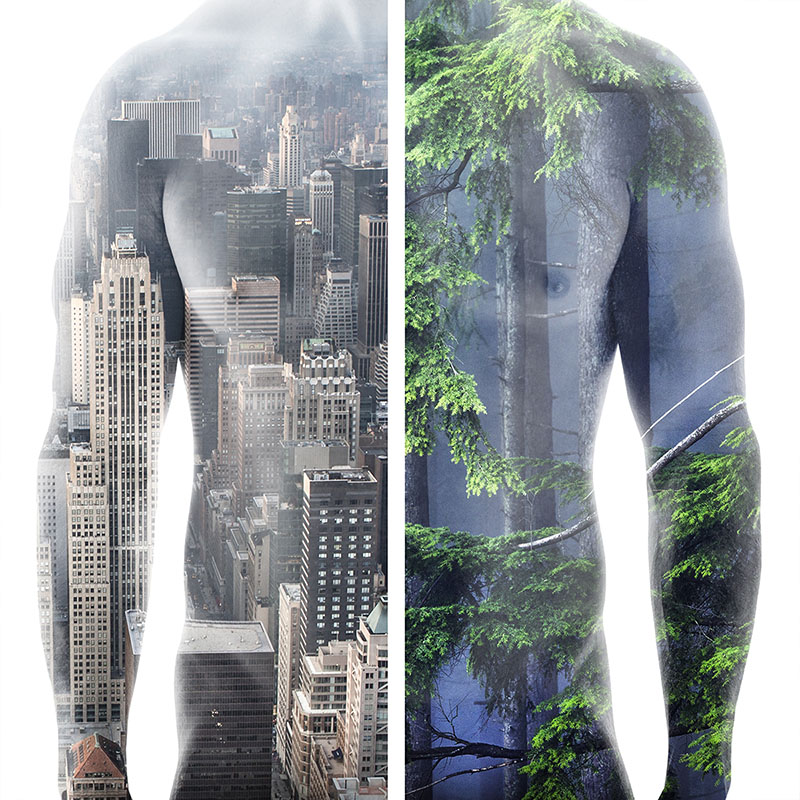 
Progression in an artist’s work is a process that occurs naturally as a result of having more time in the studio, advancing skills and the ambition to evolve one’s work. However, some artists’ work develops in startling and unexpected ways. The common thread between those who take an extraordinary leap appears to be an appetite to take risks and a desire to do something original. They are not afraid to fail.

During the pandemic, artist Ben McLaughlin has had more time to create and develop his sound resonating furniture. When the lockdown began, Mountain Galleries continued to pay his salary as communications director; that gave him time to devote primarily to his art, allowing him to quadruple his output. The gallery has supported McLaughlin as an artist from the beginning of his career. He started making an African Ubuntu drum and a bench, which have subsequently developed into a collection of large-scale musical furniture. “The bench design that he’s come up with speaks volumes about how he’s stretched his imagination and the technical requirements, dramatically,” said Wendy Wacko, owner and director of Mountain Galleries.

McLaughlin’s most ambitious project yet is a large sound resonating bench he is building on spec for a public or private space. Crafted from Vancouver-grown English walnut, he planned to begin manufacturing the bench using a CNC (computer numerical control) machine in early 2021. McLaughlin works with clients through a virtual process, using photos of their homes.

His Industrial Design degree supports his work as he considers the ergonomics and how the furniture will fit into a custom space — right down to the dimension and feel of the corners and edges of the artwork — before deciding which of the different mediums and technologies he will use to manufacture it.

“One of the benefits that I’ve found of having the time and space to create over the course of the pandemic is the ability to tie together the sometimes seemingly disparate elements and creativity in one place, and to think fully about the pieces I’m creating to make sure that every detail and level of precision is incorporated into it,” McLaughlin said.
mountaingalleries.com 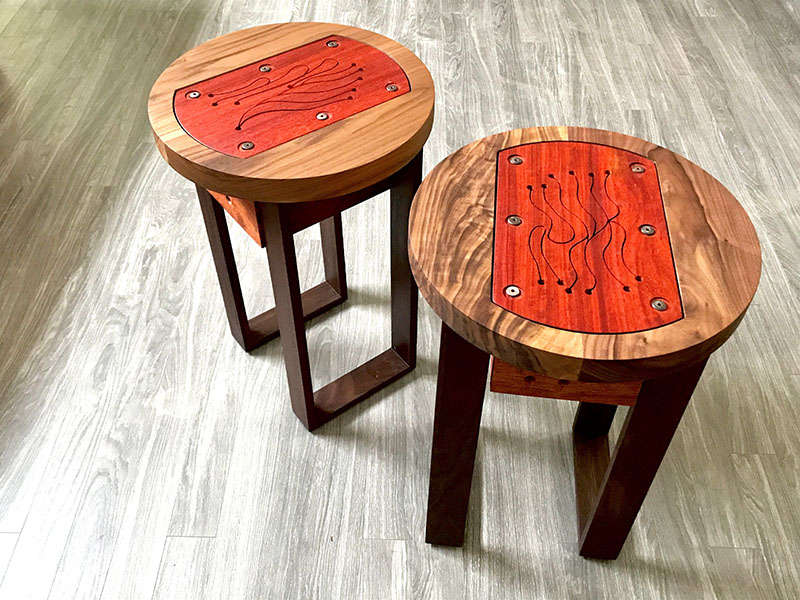 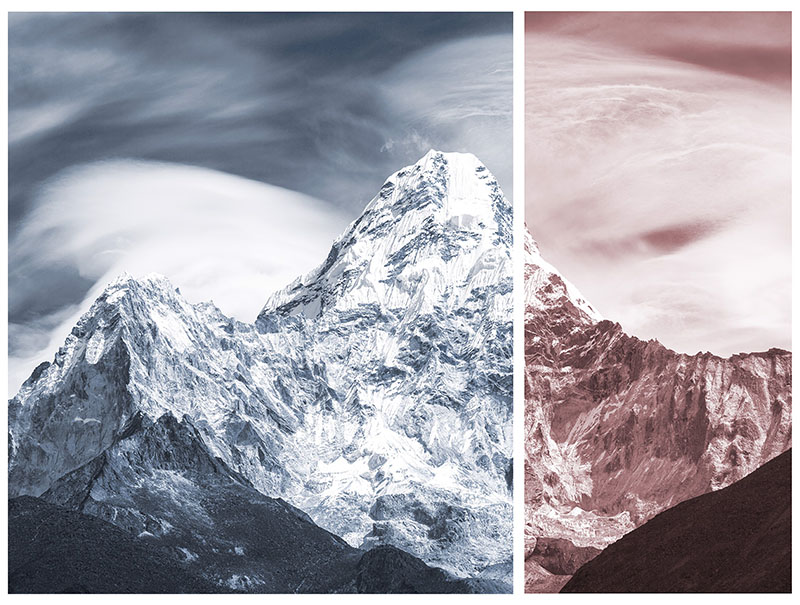 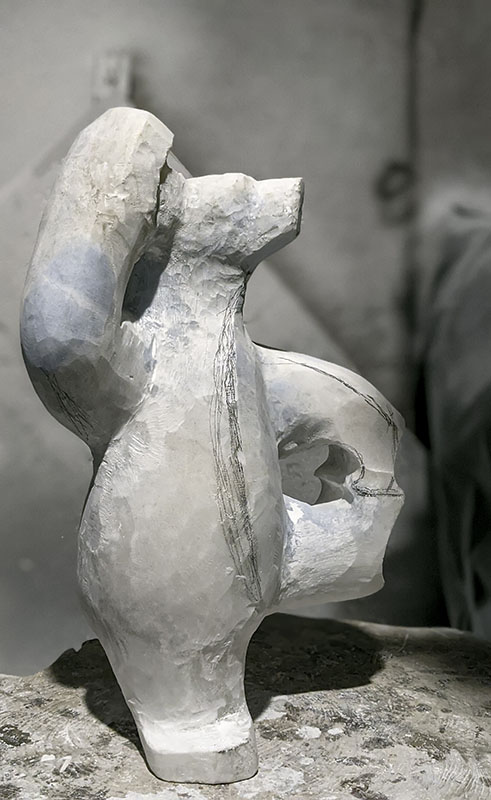 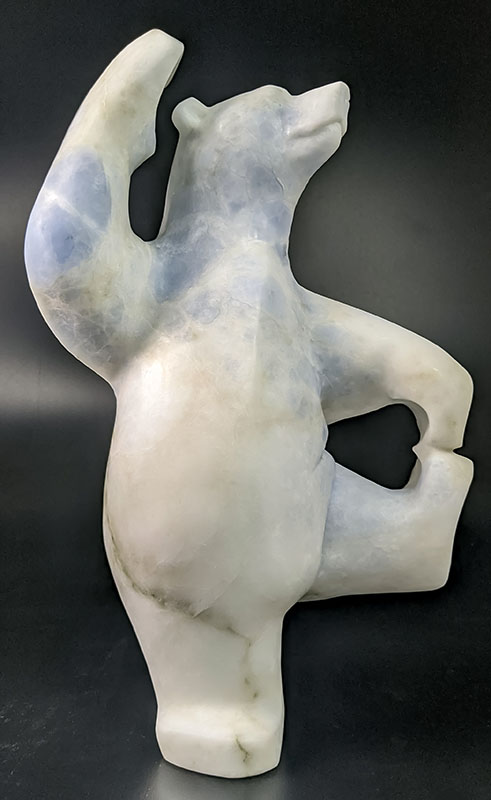 Lens-based artist Desirée Patterson has always been passionate about creating visual artworks that foster awareness and knowledge about environmental issues. In her diptych “Éveil Divided,” a trans mounted metallic print, the human form is filled with images of a grey cityscape and lush green fir trees. Éveil means awakening in French; the intent of the artwork is to bring awareness to our disconnection from nature by contrasting images of the concrete jungle with the rich ecosystem of the West Coast rainforest.

“Patterson is thinking about how we forget our surroundings, and she’s trying to bring people back, more into an awareness of our surroundings by using the human body and natural landscapes,” said Jessica Wardle-Twitchen, art consultant at the Whistler Contemporary Gallery.

Her latest series is “Anomaly,” produced in 2020, and includes the photograph “Anomaly ii.” The photos were taken on a 12-day hike to Mount Everest base camp. The composition is in thirds and produces a didactic meant to expose the threat of climate change and social injustice. “One-third of each landscape revealing the reddish hue illustrates the scale of glacier loss predicted for the coming century,” said Wardle-Twitchen. “Her work has gone from dabbling into the idea of climate change to literally giving you a statistic — visually.” whistlerart.com

Richard Chambers began carving Inukshuk projects with Fathom Stone Art carving studio and gallery six years ago and has progressed to carving wolves, moose, and exquisite dancing bears. “People love his dancing bears,” said Jon Fathom, owner and carver of Fathom Stone Art Gallery. “He has a soft touch to his carvings that people like and admire.” The stone carving “Jubilee” was one of Chambers’s first significant projects. At three feet tall and carved out of Colorado Calacatta Golden marble, the dancing bear exudes a feeling of joy and whimsy. And for inspiration, Chambers turns to his partner, Amelie Lavoie, a dancer trained in many different styles.

Chambers is always looking to try something new and different to find his own style, but it can be costly to take a big risk. It takes a lot of time to learn how to use pneumatic chisels, die grinders and diamond blades to remove the stone efficiently without eliminating too much. Recently, Chambers has been working with clay and manipulating the 3D space.

“When working with stone, the timeline is relatively long, whereas, with clay, I can whip up something in a couple of hours,” he said. Working with clay models for reference, he is emboldened to go further than he might with stone, which can be intimidating. Having learned his craft by training with Fathom Stone Art, Chambers is now assisting with carving the “Life-size Polar Bear Collection” as part of a team trained by Fathom. Carved from Colorado Statuario marble, Chambers worked on the monumental polar bear statue displayed at the Four Seasons Resort and Residences Whistler. fathomstone.com 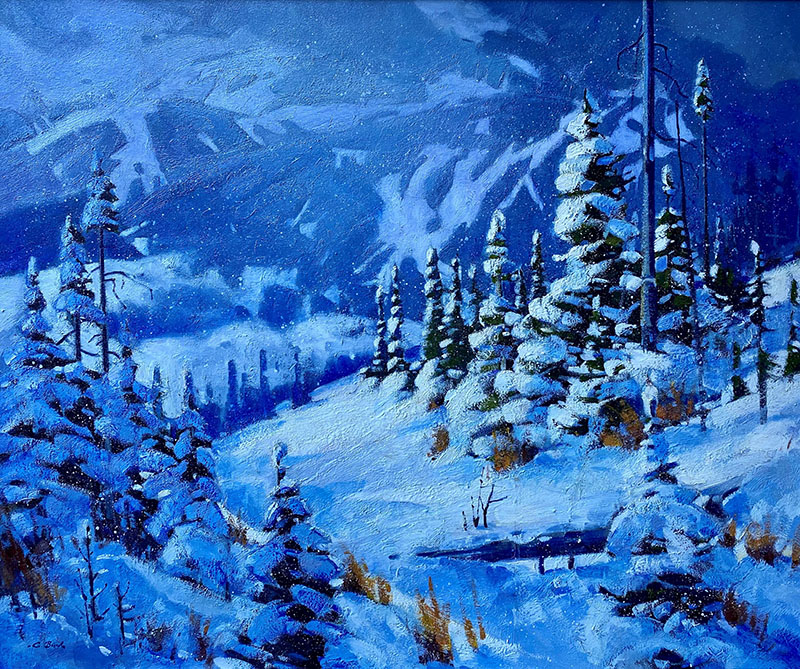 The Adele Campbell Fine Art Gallery began representing painter Cameron Bird when he was an emerging talent at age 18 and has been featuring his art for 25 years. Liz Harris, owner and director of the gallery, describes his artistic journey as a gradual evolution rather than a massive shift over a month or even a year. “When you look back at his paintings from 20 years ago, you really see that beautiful evolution,” Harris said. “He’s always pushing things, pushing his palette, a style, a stroke, his tone, but not chasing anything — I think just finding himself as an artist; finding his confidence.”

A comparison of the same subject — Whistler Mountain — in his early, blue-hued painting “Storm Break,” with the recent painting “Morning Glow on Whistler Mountain,” reveals a shift to a more colourful palette and impressionistic style.

Although it might be difficult to identify the two paintings as being from the same artist, Bird’s passion for the mountain scene in winter and his ability to capture that sense of grandeur, size and awe are evident in both. Decades of artistic practice also brings assurance. Bird is very comfortable painting in front of a crowd, as he has done so many times in Whistler at the gallery. “He’s a block painter, and every single stroke is so efficient. He knows exactly what he’s going to paint. He doesn’t have to draw it out and think it out,” said Harris. “And to me, that’s completely emblematic of his confidence and how much he’s grown over the years.” adelecampbell.com

Only time will tell how the pandemic has affected both artists and art buyers. McLaughlin observed that with so many people working from home, many clients are investing more in their home space. He adds, “They’re looking around and thinking, ‘What is it I really want here, as opposed to what I just have, because it’s a surface?’” As for artists, Harris noted that the current conditions have resulted in artists spending more time in their studios — typically in their own homes — as a comfort. Many of the scenes depicted are set closer to home since no one is travelling much, if at all. “I think artists are tapping into that intimate knowledge of our surroundings — the lighting, the mood, how we’re feeling inspired by our natural world — which we’re all immensely grateful for,” said Harris. 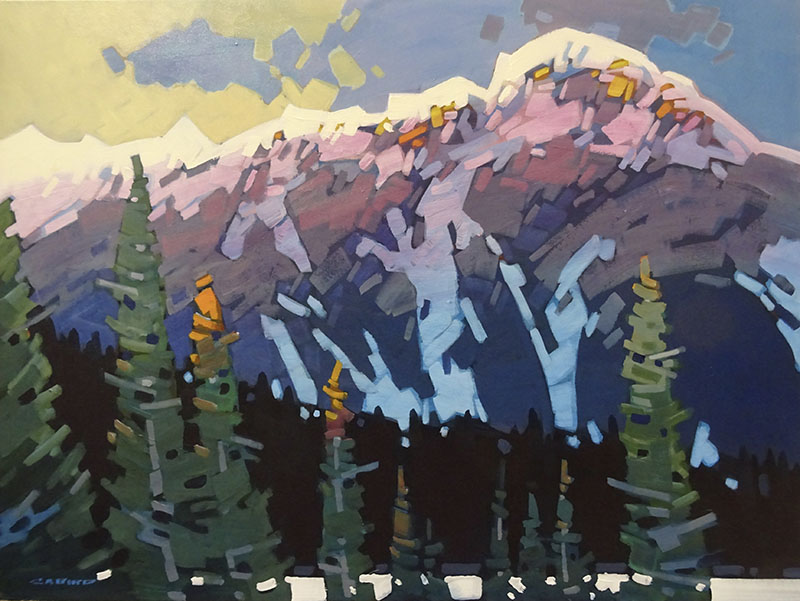