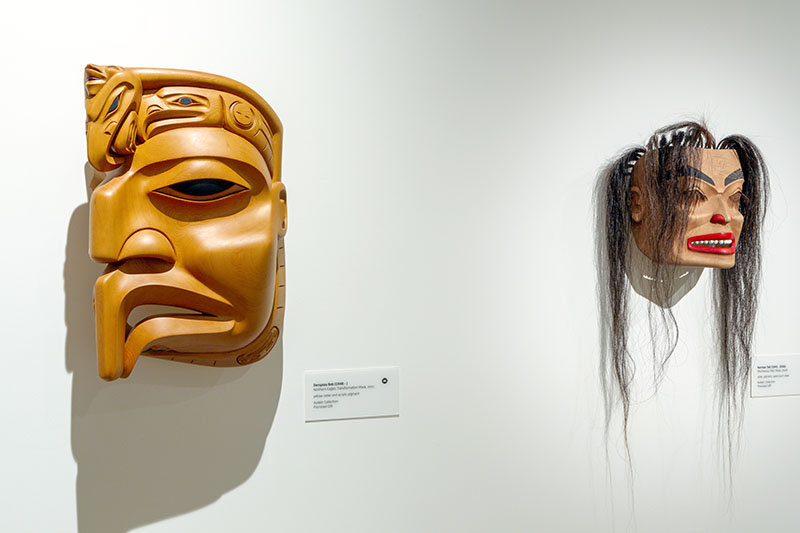 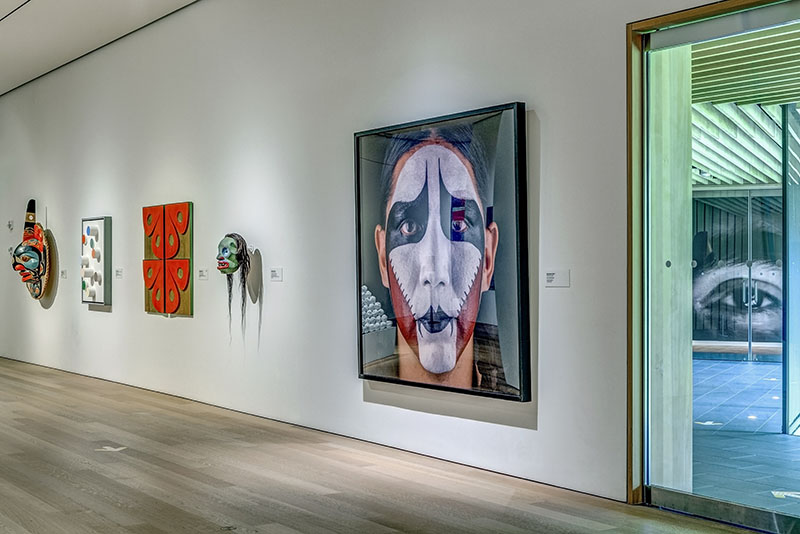 This year we encourage you to be captivated by our spectacular province of British Columbia. Art lovers who seek a world-class art experience need not cross borders. The Audain Art Museum (AAM) in Whistler showcases a permanent collection of more than 200 works of art from British Columbia — from the 18th century to the present day — by diverse, internationally renowned artists.

The collection of photographs, acquired by the National Gallery of Canada throughout 50 years, illuminates the significant role photography plays as an art form and in scientific invention, self-portrayal, exploration, discovery, and documentation. As a viewer, we are invited to see beyond the limitations of our known and perceived worlds. “Neurons,” by Nicolas Baier, a Montreal photographer, is the digital assembly of months of photographing the firing of the human neuron, shot at a one-second exposure. In “Mississippi 2” by Isabelle Hayeur, a painterly and mysterious riverine underworld contrasts against a bright, sharply exposed riverbank littered with refuse.

Photography is recognized as a means of recording the present before it is lost to time. Stan Douglas’s “Hogan’s Alley” depicts an historic neighbourhood that no longer exists but has now been re-created. “What Douglas did, based on archival photographs, maps, street views — he reconstructed Hogan’s Alley digitally,” says Dr. Curtis Collins, director and chief curator of the AAM. The panoramic, night-time view rebuilds an important cultural corridor that was once home to Vancouver’s Black population and was later razed in the late ‘60s to make way for the Georgia Viaduct in the name of “urban renewal.” This work is located in the AAM’s permanent collection, within the holding of Vancouver photo-conceptualism works, and serves as a thematic connection between the special exhibition and the permanent collection. 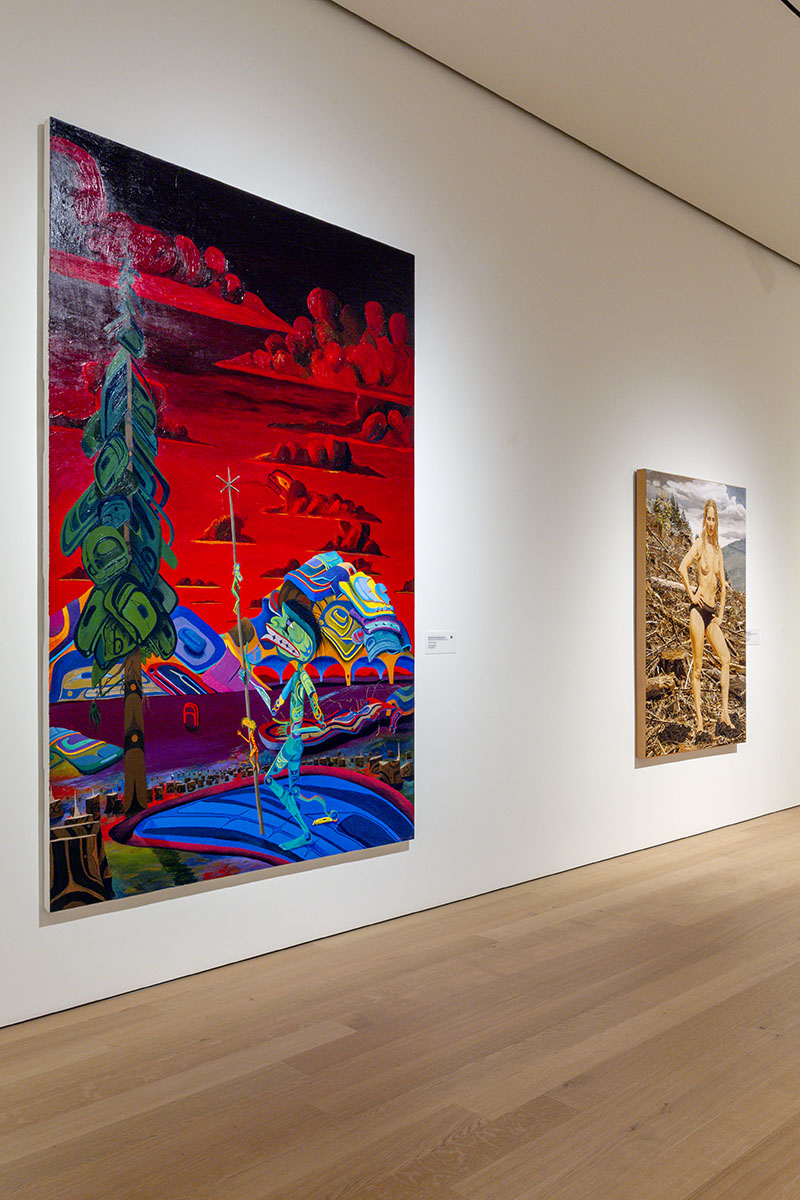 Left: Lawrence Paul Yuxweluptun, “Clearcut to the Last Old Growth Tree,” 2013
Right: Laurie Papou, “She saw her fallen clothes as a charity, a homage to the missing trees,” 2000 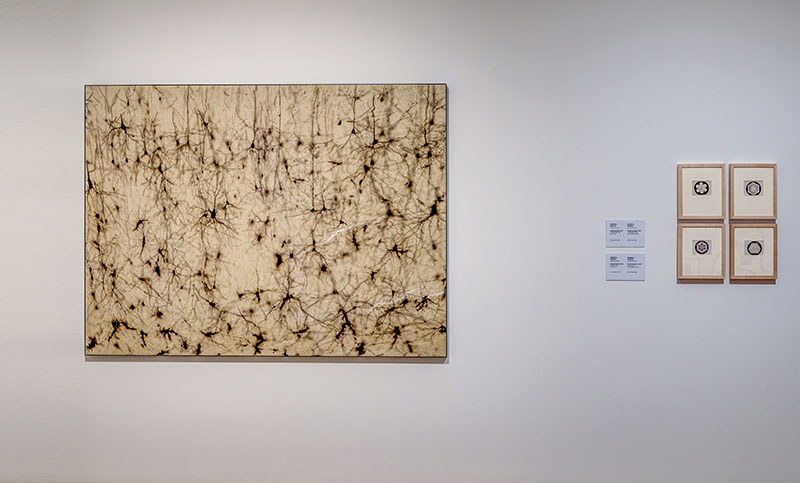 During the spring, the Audain Art Museum joined most businesses in pausing public operations to curtail the coronavirus. For several months Collins and the Audain staff used this unexpected time to re-imagine the experience of the permanent collection. They re-hung parts of the collection, introduced artworks that have been in storage, and strategically re-positioned existing artwork. Subsequently, moving through the collection feels entirely new, fresh and exciting.

The chronological relationship between artworks has been interrupted. Now, many of the paintings, photographs, sculptures, and masks are located based on their conceptual connection or through commonalities in materials, colours, or subject matter to create dynamic new relationships between the works. 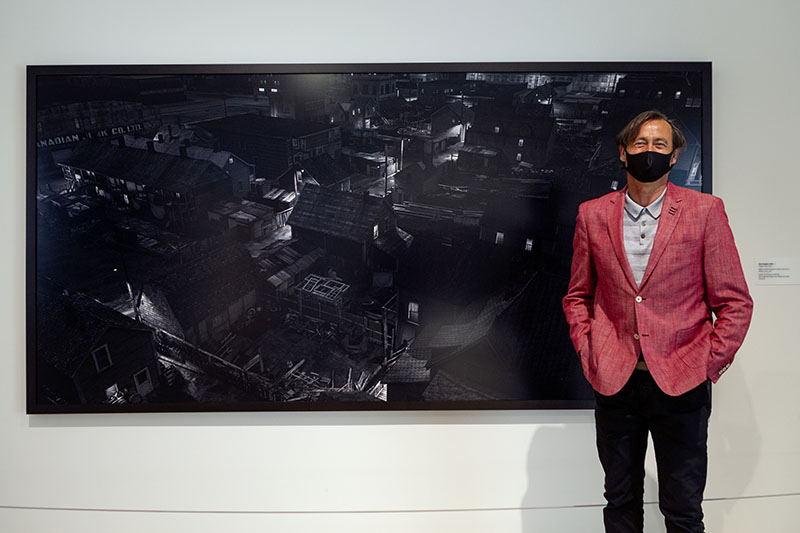 It’s a delight to stroll through the gallery, spotting the subtle curatorial connections between the works of art, each astonishing in its own right. One sightline through the gallery reveals Bill Reid’s “Killer Whale” bronze sculpture that appears to leap from Takao Tanabe’s “Strait of Georgia 1/90: Raza Pass” painting on an opposing wall.

Some of the relationships are startling and provocative. In another section of the gallery, the artist’s connection to the environment is explored. The observer takes an active role in comparing the contrasting styles, medium, and colour of Lawrence Paul Yuxweluptun’s “Clearcut to the Last Old Growth Tree,” and Laurie Papou’s “She saw her fallen clothes as a charity, a homage to the missing trees.” While the two paintings are vastly different in style, the emotions of anguish, anger and loss at the act of violence on the natural environment being acutely felt in both artworks.

The AAM was founded on the philanthropic gift of the British Columbia art collection of Michael Audain and Yoshiko Karasawa. And now, new didactic wall panels with information about the collection provide an intimate touch, as they include commentary from Michael Audain. “It is a very personal collection, and now you hear his voice,” says Collins. 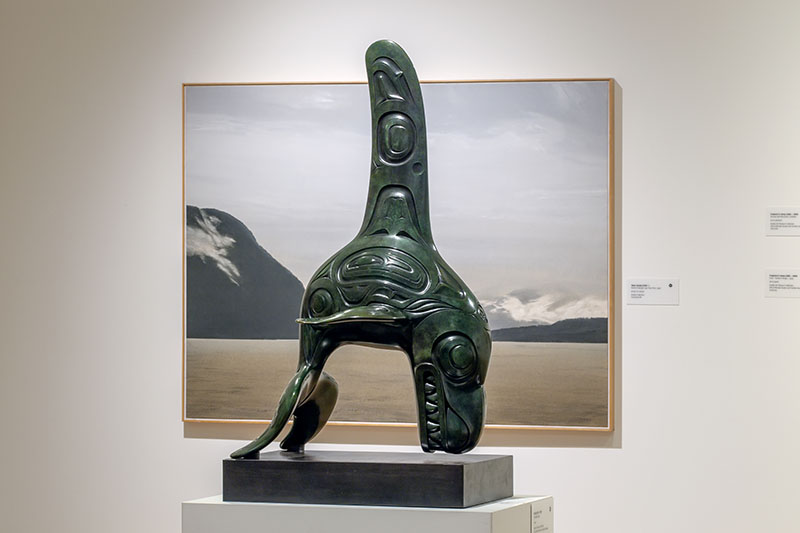 The Museum’s spacious galleries, designed for one-way flow, limit the number of guests in each room to maintain social distancing recommendations. The Audain Art Museum staff wear masks, and hand sanitizer is provided to offer a safe and comfortable experience for all.

Look for their upcoming special exhibition “RESERVOIR” by Rebecca Belmore, which will run from Nov. 14 until April 2021. For more information about the Audain Art Museum’s exhibitions and special events, visit audainartmuseum.com.